Dancing in the Presence of God

The Old Testament Scripture passage the other day for mass was about the Ark of the Covenant being brought to Jerusalem. To give some context, the Ark of the Covenant represented in a very close way the presence of God among the Israelites. It was God’s throne on earth, so to speak. And the Israelites had had it through the wanderings in the wilderness, the entering into the Promised Land, and through the years beyond. But, after falling into sinful lifestyles themselves and trying to use it as a kind of good-luck charm to win one of their battles, God got fed up and let the Ark fall into the hands of their enemies. They felt horrible afterward, of course, and in due time the Ark, through a miracle, came back to them. But it remained at one of the Israelite’s homes for a while – maybe because the people were too scared or too reverent to just bring it back to the Tabernacle, where it had resided before. This was one God they knew they couldn’t mess around with – at least for now.

But eventually, King David, with a heart after God’s own heart, ascended to Israel’s throne. And he felt it was time to bring the Ark back to where it belonged: in the Tabernacle, where God could be properly worshiped by the people. And as it made its way through the streets of Jerusalem, the capital city, David couldn’t contain himself. He stripped down to a linen apron and danced for joy like a child before the Ark of the Lord.

You can imagine the different responses. There may have been the Pharisaical types, thinking to themselves, “That is not how God has prescribed worship. This is disorderly, irreverent.” And in some ways, they would have been right. There may have been the hip types who wondered if this was the best PR for God. I mean, most Israelites probably had an idol or two stuffed away in their own homes just to hedge their bets. It was hard enough keeping the Jews faithful without a near-naked king dancing around like a crazy homeless man in this sort of frenzied worship. Maybe there were others who were anesthetized by a ritualistic faith that was comfortable for them, and not nearly as demanding as the Torah really made it out to be. This David rubbed them the wrong way – this whole Jehovah thing being a little too real, a little too dominating in his life. “Let’s hope he doesn’t try to push this fanatical brand of Judaism on us.”

But what did David think? David was lost in the joy of his relationship with God. Daddy had come home, and like a toddler, he couldn’t contain himself. Getting lost in the moment, for him, meant stripping down and dancing, the vulnerability of his childlike faith being made visible for the whole world to see.

And that’s dangerous, isn’t it? To open yourself up like that… to be that honest and passionate about what you believe? We’re afraid of that kind of radical trust and belief. It’s not safe. It’s putting yourself out there for anyone to shoot at you, like a sheep to the slaughter. Maybe we’re not smart enough to hold the high debates. Maybe we’re too human, and everyone will know just how lame a Christian we really are when we let them down. Maybe they’ll think we’re weird – a throwback to a time when tribes fought each other for their own pet gods. Maybe they’ll fear us, finding the only comparison they can make is with a terrorist hijacking a plane.

But joy demands, in the most exhilarating and passionate way, to get out. The Pharisees will look down on you, the hipsters will shuffle their feet in embarrassment, and the half-hearted in the church will feel the prick of their own consciences.

But you…. you will dance—not because you think that your ministry will be fruitful, not because you will feel happy all the time doing what you love, not because you won’t get burnt out and depressed sometimes—but because God has entered the building. God has come home in your heart, where He belongs. And you have come home in His.
At World Youth Day, where Pope Francis spoke to millions of young Catholics, he said this:

What do I expect as a consequence of the Youth Day? I expect a mess. There will be one. There will be a mess here in Rio? There will be! But I want a mess in the dioceses! I want people to go out! I want the Church to go out to the street! I want us to defend ourselves against everything that is worldliness, that is installation, that is comfortableness, that is clericalism, that is being shut-in on ourselves. The parishes, the schools, the institutions, exist to go out!

Whatever kind of Christian you are, whatever your stripe, I’ll pray this for you. Pray this for me, too. 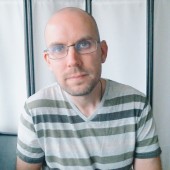 Let Our Hearts Be Changed