In college at Franciscan University of Steubenville, the Scripture verse above began to take root in me. I knew the Lord had a plan for me, but it is hard for a young adult to see this amidst making friends, living 2500 miles from home, and pursuing my vocation as a student first. I was curious about what the future would hold for me—looking at career options, majors, and possibilities of mission work or travel after college. I wondered, “What is my calling? What do you want of me, Lord?”

Plans to be a Teacher and an Author

Since I can remember whenever anyone asked me what I wanted to be when I grew up, I said a teacher and an author. I wanted to teach 2nd grade so I could prepare kids for their First Communion and First Reconciliation. Why did God put this desire on my heart? I hadn’t the slightest clue at the time. It probably stemmed from my favorite teacher being my second grade teacher and also the faith my parents had instilled in me at an early age. I would play “Teacher” with my little sister. I gave her tests that I created and had the entire teaching kit with the board pointer, desk name tags, and all. Teaching enlivened me.

As for writing, I’m not sure where it came from, but making a book in my fourth grade class with a hard cover just like the real authors was a dream come true. Fourth grade became my favorite grade because of all the fun events including the Young Authors’ Celebration where we presented to others our books we wrote and illustrated. I am told that when I was a toddler, the babysitter would sit and read and read to me. I just ate it all up. Eventually I learned how to read and the perpetual learner in me bloomed. I continued to read to my younger siblings, and later, in college when I became an elementary education major to teach second grade, my favorite class was Children’s Literature. You’re telling me that I can sit in the children’s books section of a university library all day and just read? I’m in heaven! On top of that I have to teach my little preschoolers by reading with inflection and excitement to get them to love reading? All right, twist my arm!

I continued pursuing my degree and loved learning about education and working with kids (who have always energized me and had my heart). Their innocence, joy, and cute unexpected comments are Jesus smiling in front of me. With friends I would discuss tips in the classroom, problems in education today, and the need and influence of good educators today. I was proud to do my part in molding future generations.

My faith began to take off at Franciscan. I had always prayed and been the “religious” girl. My family was known for being the devout Catholic family but it finally became my own story while at Franciscan. I like to say the soil was my family life and the seeds were from Franciscan University. I started going to daily Mass during my time there. I was going to Confession regularly, joined a faith household (a Catholic community of girls, similar to a sorority, called Sacrifice of Love) and had found a home at the little portiuncula chapel designed after St. Francis’ in Assisi that had perpetual adoration. I didn’t know what a holy hour was. I thought people just popped in for a quick prayer. I was not yet brave enough to sign up for an entire hour once a week. Every dorm had a chapel in it with the Blessed Sacrament and those chapels became my place of comfort. My prayer life increased and I met people with the same Catholic morals and values as me, who helped me to grow in my faith. It was the perfect place for my Catholic faith to be nurtured and to skyrocket.

As sophomore year rolled around there was a group of young women going on a discernment retreat with a teaching order called the Dominican Sisters of Mary, Mother of the Eucharist. I knew this community because they taught at my parish school back home. I had always assumed I would get married (Just check out this typical girl’s Pinterest board if you don’t believe me!) but was open to the idea of religious life. I figured God would tell me in His time which vocation would grant me my heart’s desires and was placed in me at Baptism. I decided to be active in my discernment of marriage or religious life so I went on their retreat to figure it out.

To start the retreat the sisters passed out to each retreatant a different title of Our Lady. I got “Mary, Spouse of the Holy Spirit.” Oh no, that sounded like Jesus was telling me I was going to be His bride, a nun. It had the word spouse in it and that was the name of the group of woman at school who were becoming nuns. Was God trying to tell me I would be a nun? No, thanks! I did not like the one I got. Why couldn’t it be something like “Mary, Cause of Our Joy?” That one at least didn’t imply I was going to become a nun. Did God bring me on this retreat to tell me I would become a religious sister? Fear rushed over me. I thought, “No, no, I am not ready for this.” As much as I had said I was open to religious life as my calling, I realized I was not from my internal reaction to a simple piece of paper.

The retreat progressed and we had Eucharistic adoration. In adoration I was flooded with my feelings for the guy I had liked for years, a reaction I hadn’t expected on this retreat. I hadn’t realized he had meant that much to me. The feelings were so strong I started to think of marriage, its possibility, and a future with him. Upon leaving the retreat a sister asked if I was called to religious life and I responded honestly and wholeheartedly from what I had felt in adoration and said, “I think the Lord is calling me to marriage.” Whew, that was a close one—I was almost a nun! 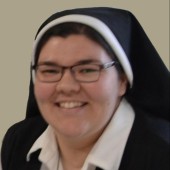 Advice Before Entering Religious Life (But Applies to All)