Posted by Deacon Lawrence | Jan 12, 2020 | A Catholic Deacon reflects on Faith, Art, and Our Spiritual Journey (by Lawrence Klimecki)

“We have a God who chose to lead us by example” 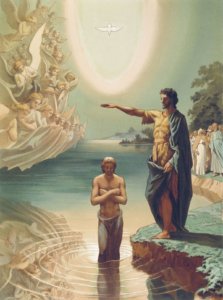 Why would Jesus insist that John the Baptist baptize Him? John preached a baptism of repentance, for the forgiveness of sins. Jesus, being God, had no sin to repent. Yet when John tried to argue that it was Jesus who should baptize John, Jesus insisted on being baptized, why?

The Baptism of Jesus accomplished several things in God’s greater plan for our salvation. By His baptism, Jesus accepted His role as God’s suffering servant, beginning the final act that would save us from our fallen nature. By descending into the water, Jesus sanctified all the water in the world making it the proper matter for the Church to use in the Rite of Baptism. As Jesus came up out of the water, Heaven, which had been closed since the fall of our first parent due to their disobedience, was reopened to us, restoring the possibility of our communion with God.

Perhaps one of the least recognized effects of the Baptism of Jesus is that He chose to associate Himself with us poor sinners. He did not stand aloof setting Himself apart from the crowd. Instead He insisted that He be treated like all those who had come to John for baptism. By doing so He also set an example for the rest of us to follow, as we are called to follow Christ in all things.

Have you ever wondered why some of the greatest military leaders in history inspired such love and loyalty among their soldiers?

In August of the Year of Our Lord 1409, the Teutonic Knights of Germany invaded the Kingdom of Poland. This led to full scale war pitting the Knights against the allied forces of the Kingdom of Poland and the Grand Duchy of Lithuania. The war culminated in the Battle of Grunwald fought on July 15,1410. The outcome of the battle shifted the balance of power in Central Europe leading to the rise of the Polish-Lithuanian Commonwealth.

Historically there have been two ways that generals have led their armies to victory. These two diverse tactics were on full display in the battle. King Władysław Jagiełło, supreme commander of the Polish-Lithuanian forces, set up his command center on a nearby hill overlooking the field of battle. From there he directed the movement of his troops and resources from a high vantage point, apart from the battle.

Grandmaster Ulrich von Jungingen of the Teutonic Knights, on the other hand, planned the battle down to the last detail, issued instructions, and then went down among his forces and personally led almost a third of the Teutonic strength against the Polish forces. Both ways of leadership inspire loyalty, but only one inspires love.

We do not have a God who stands apart, directing our movements from on high. We have a God who chose to lead us by example. Jesus came down to us to be one of us. He pitched His tent in our midst and dwelt among us, all out of love for us.

How deeply do we love Him in return? If we believe that He loves us and will not lead us astray, then we should be prepared to follow Him, regardless of the scorn of the world or the scandals of sinful followers. Jesus sent the Holy Spirit to guide us through His Bride the Church. When the Church instructs us on religious and moral issues we can be certain that instruction is guided and protected by the Holy Spirit.

There are people, some with very high public profiles, who have chosen to leave the Church due to the corruption of some of her leaders. This is a shame that must bring tears to Our Lord. Would one give up on education because of a bad experience with a few teachers? Would one renounce their citizenship in the United States of America because of the corruption and scandals that surround our political leaders?

The proper response to the abuse heaped upon our Mother, is not to abandon her, but to fight for her, to heal her from within. Our faith transcends the various scandals that plague the Church. Our faith in Holy Mother Church does not depend on priests, bishops, cardinals or even the pope. Our Catholic faith depends on our love, devotion, and loyalty to Christ.

Let us pray for open hearts and minds, and the strength to give ourselves completely to Him, all out of love for Him.

Pax vobiscum
The Feast of the Baptism of the Lord

This Is Why We Should Want To Obey

This Is What Is Important