How We Can Overcome Every Difficulty

Posted by Deacon Lawrence | Aug 25, 2019 | A Catholic Deacon reflects on Faith, Art, and Our Spiritual Journey (by Lawrence Klimecki)

“Every difficulty we encounter in our lives, is either sent by God or permitted by Him for our benefit.” 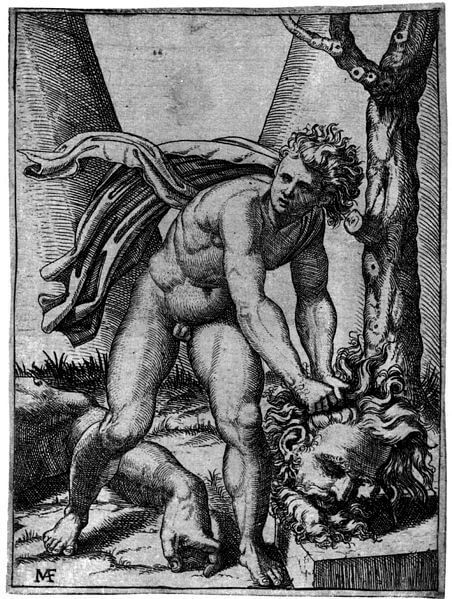 David cried out, “Who is this uncircumcised Philstine, that he should defy the armies of the living God?”

David was just a boy. He was not yet old enough to fight alongside his brothers. Instead he was there to bring food and tend to their weapons. Even so, his words stung the pride of his brothers and they questioned his motives for being there. Goliath was twice the size of any Israelite soldier. And so, no one was brave enough to accept the challenge to single combat.

But David did not waver. He went to King Saul offering to champion Israel against the giant. Saul accepted David’s offer. Perhaps the king was impressed with David’s conviction. Or maybe Saul trusted in the power of God. Whatever the reason, David walked out into the shallow river valley, alone, to face the giant. His only weapon was a sling and a few stones. But again David showed his fearlessness in confronting this massive foe.

“You come to me with a sword and with a spear and with a javelin; but I come to you in the name of the LORD of hosts, the God of the armies of Israel, whom you have defied. This day the LORD will deliver you into my hand, and I will strike you down, and cut off your head; and I will give the dead bodies of the host of the Philistines this day to the birds of the air and to the wild beasts of the earth; that all the earth may know that there is a God in Israel, and that all this assembly may know that the LORD saves not with sword and spear; for the battle is the LORD’S and he will give you into our hand.”

Even if most people forget the details, almost everyone remembers the outcome. David kills Goliath. A single stone, shot from his sling, buried itself deep in Goliath’s forehead.

It was an amazing victory, but it was not magic. God’s grace prepared David for that critical moment. We know this because what is often overlooked is the fact that King Saul took some convincing. He was not eager to send a young untrained boy to die at the hand of the Philistine champion.

Saul said to David, “You are not able to go against this Philistine to fight with him; for you are but a youth, and he has been a man of war from his youth.”
But David responded, “Your servant used to keep sheep for his father; and when there came a lion, or a bear, and took a lamb from the flock, I went after him and smote him and delivered it out of his mouth; and if he arose against me, I caught him by his beard, and smote him and killed him. Your servant has killed both lions and bears; and this uncircumcised Philistine will be like one of them, seeing he has defied the armies of the living God.” And David said, “The LORD who delivered me from the paw of the lion and from the paw of the bear, will deliver me from the hand of this Philistine.”

David explained that, because he was the youngest son of the family it was his job to tend the family’s flock of sheep. He wandered through the wilderness with the flock, enduring cold nights and hot days. David could not run for help when wild animals attacked his sheep. He had to fight them off alone. It was just through such experiences, that God prepared David for his mission.

God is behind every hardship and difficulty. Through them, He teaches us and disciplines our souls. God trains us to love and serve him better and better. Every difficulty we encounter in our lives, is either sent by God or permitted by Him for our benefit.

We are a fallen people. And we live in a fallen world. Man is wounded by original sin, and that wound makes us spiritual cripples. We forget that we are created to know and experience wisdom, joy, and God’s love.

Christ has redeemed us. His sacrifice has healed our wounds. But now, by allowing us to know hardship, He retrains us. And that training takes discipline – trials and hardships. It takes going through the “narrow gate.”

Nothing is outside of God’s wise and loving plan for our salvation. And the main focus of that plan is to restore us to the fullness of life that sin has disrupted.

But how often do we forget this simple lesson?

The Problem With Tolerance

The Work of the Christian

Can Abstract Art Be Christian?