Of Maps, Treasure, and the Search for God

Posted by Deacon Lawrence | Mar 22, 2020 | A Catholic Deacon reflects on Faith, Art, and Our Spiritual Journey (by Lawrence Klimecki)

“People who say they are spiritual but not religious are looking for a treasure without a map.” 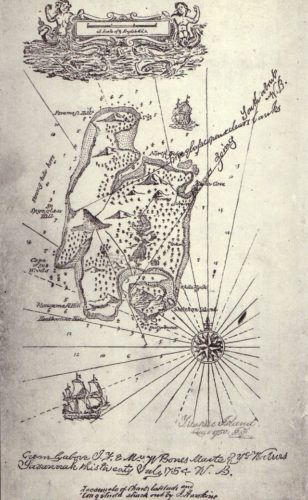 Robert Louis Stevenson’s novel “Treasure Island” had a tremendous impact on popular culture. It cemented pirates firmly in the popular imagination. Treasure Island gave us one-legged buccaneers with talking parrots, treasure maps marked with an “X,” and pirates who talk, well, like pirates.

In the story, the young hero, Jim Hawkins, comes into the possession of a map to a buried pirate treasure. With a few responsible adults, he sets off on a grand adventure to find it. He encounters many difficulties and obstacles but it is the map that is of crucial importance. Without it, there is no treasure to be found.

Maps are wonderful things. They help to guide us to where we are going, and they point out things along the way that we might otherwise miss. We tend to take them for granted these days but historically maps were prized possessions and jealously guarded.

Now imagine the story differently. Imagine Jim Hawkins is told that there is a buried treasure waiting to be found on an island somewhere out in the ocean, but he is not given a map to find it. He would have no idea of even where to start.

If by some stroke of luck or good fortune he managed to find the island, he would have no idea where on the island to look. All that he could do would be to wander around and hope that sooner or later he would bump into it.

People who say they are spiritual but not religious are like that. They are looking for a treasure without a map. The treasure they seek is God, but they do not have a map to help them find Him.

Why Did Jesus Come To Us?

If you were to ask people why Jesus came to us you would probably get a number of responses that all mean more or less the same thing. “He came to save us,” “He came to free us from sin,” “He came to die for us.”

That is one reason why the Church has a hierarchy of popes, bishops, priests, deacons, religious, and laity. It had to be a visible sign that pointed to God. It had to appeal to our senses that give us information about what is real.

The visible Church was not something man added on later in history. The Church was always part of God’s plan from the beginning because He respects our human nature.

In the Gospel Jesus uses mud and spittle to cure a blind man. Why does He do this? There were many other times He healed with a word or even a thought. So what was different this time?

God made us creatures of flesh and spirit. Sometimes our physical senses have to be engaged just as much as our spiritual sense in order for us to get the message.

Jesus heals as a sign that He has come to heal us of the wounds caused by sin. He does this by establishing His kingdom here on earth. But before He can do that we have to be open to the fact that we are sinners. He came to us to help us to see, and then to be healed. And to make sure the message really gets through, He reaches out to both our physical and spiritual natures.

He continues to do this today.

People today that claim to be “spiritual” but not “religious,” feel that the formal structure of the Church is an artificial construct imposed upon the purely spiritual Church Jesus intended. But history shows us that this is not how God works.

God created us human, and the Church He established to administer His saving grace respects our human nature, which is a unity of invisible, spiritual soul, and visible body.

The sacraments take on visible signs for the same reason. God is eager to reach out to us, physically as well as spiritually, because that is how He made us.

What We Truly Thirst For