April 28th is the feast of St. Louis de Montfort.

In True Devotion to Mary, no. 54-59, St. Louis de Montfort prophesied that in latter times Mary will rouse her humble servants to fight against the enemy and that in union with her, they will crush the head of Satan and bring victory to Jesus Christ.

Devotion, according to the teaching of St. Louis de Montfort, consists in “perfect consecration to Jesus” by means of a “perfect and complete consecration of oneself to the Blessed Virgin.”

True devotion and love of the Blessed Mother does not eclipse the supremacy of Christ and our love and worship of Him.

Mary will never lead her children on an idolatrous path away from her Son. Just as her soul eternally proclaims and magnifies the greatness of the Lord (Luke1:46), so our love for the Mother of God will magnify our love for Him, greatly proclaim His greatness in and through us, while drawing us closer to the Sacred Heart of Jesus and forming us most perfectly in His image.

If Jesus Christ, the Head of men, is born in her . . . the members of this Head must also be born in her by a necessary consequence . . . The Head and members are born of the same Mother. – St. Louis de Montfort

But Mary’s power over the evil spirits will especially shine forth in the latter times, when Satan will lie in wait for her heel, that is, for her humble servants and her poor children whom she will rouse to fight against him. In the eyes of the world they will be little and poor and, like the heel, lowly in the eyes of all, down-trodden and crushed as is the heel by the other parts of the body. But in compensation for this they will be rich in God’s graces, which will be abundantly bestowed on them by Mary. They will be great and exalted before God in holiness. They will be superior to all creatures by their great zeal and so strongly will they be supported by divine assistance that, in union with Mary, they will crush the head of Satan with their heel, that is, their humility, and bring victory to Jesus Christ. – True Devotion (no.54)

Finally, God in these times wishes his Blessed Mother to be more known, loved and honored than she has ever been…Then they will clearly see that beautiful Star of the Sea, as much as faith allows…Under her guidance they will perceive the splendors of this Queen and will consecrate themselves entirely to her service as subjects and slaves of love. They will experience her motherly kindness and affection for her children. They will love her tenderly and will appreciate how full of compassion she is and how much they stand in need of her help. In all circumstances they will have recourse to her as their advocate and mediatrix with Jesus Christ. They will see clearly that she is the safest, easiest, shortest and most perfect way of approaching Jesus and will surrender themselves to her, body and soul, without reserve in order to belong entirely to Jesus. – True Devotion (no.55)

But what will they be like, these servants, these slaves, these children of Mary?

They will be ministers of the Lord who, like a flaming fire, will enkindle everywhere the fires of divine love. They will become, in Mary’s powerful hands, like sharp arrows, with which she will transfix her enemies.

They will be as the children of Levi, thoroughly purified by the fire of great tribulations and closely joined to God. They will carry the gold of love in their heart, the frankincense of prayer in their mind and the myrrh of mortification in their body. They will bring to the poor and lowly everywhere the sweet fragrance of Jesus, but they will bring the odor of death to the great, the rich and the proud of this world. – True Devotion (no.56)

They will be like thunder-clouds flying through the air at the slightest breath of the Holy Spirit. Attached to nothing, surprised at nothing, troubled at nothing, they will shower down the rain of God’s word and of eternal life.

They will thunder against sin, they will storm against the world, they will strike down the devil and his followers and for life and for death, they will pierce through and through with the two-edged sword of God’s word all those against whom they are sent by Almighty God. – True Devotion (no.57)

They will be true apostles of the latter times to whom the Lord of Hosts will give eloquence and strength to work wonders and carry off glorious spoils from his enemies.

They will sleep without gold or silver and, more important still, without concern in the midst of other priests, ecclesiastics and clerics. Yet they will have the silver wings of the dove enabling them to go wherever the Holy Spirit calls them, filled as they are with the resolve to seek the glory of God and the salvation of souls. Wherever they preach, they will leave behind them nothing but the gold of love, which is the fulfillment of the whole law. – True Devotion (no.58)

Lastly, we know they will be true disciples of Jesus Christ, imitating his poverty, his humility, his contempt of the world and his love.

Their hearts will not be troubled, nor will they show favor to anyone; they will not spare or heed or fear any man, however powerful he may be. They will have the two-edged sword of the word of God in their mouths and the blood-stained standard of the Cross on their shoulders. They will carry the crucifix in their right hand and the rosary in their left, and the holy names of Jesus and Mary on their heart. The simplicity and self-sacrifice of Jesus will be reflected in their whole behavior.

Such are the great men who are to come. By the will of God, Mary is to prepare them to extend his rule over the impious and unbelievers. But when and how will this come about? Only God knows. For our part we must yearn and wait for it in silence and in prayer: “I have waited and waited.” – True Devotion (no.59)

Totus tuus ego sum, et omnia mea tua sunt. Accipio te in mea omnia. Praebe mihi cor tuum, Maria. (“I belong entirely to you, and all that I have is yours. I take you for my all. O Mary, give me your heart”)

As a young seminarian during the Nazi occupation, while he worked in Krakow’s Solvay factory, the future Pope St. John Paul II “read and reread many times and with great spiritual profit” the work of St. Louis de Montfort.

Then I understood that I could not exclude the Lord’s Mother from my life without neglecting the will of God-Trinity, who willed to begin and fulfill the great mysteries of the history of salvation with the responsible and faithful collaboration of the humble handmaid of Nazareth. – Pope John Paul II, Rome, Oct 15, 2000

The salvation of the world began through Mary and through her it must be accomplished. – True Devotion (no.49)

“All Yours” was the motto of his episcopate and pontificate chosen as an act of entrustment to Mary.

In repeating every day ‘Totus tuus,’ and living in harmony with her, one can attain to the experience of the Father in limitless confidence and love, to docility to the Holy Spirit, and to the transformation of self according to the image of Christ. – Pope John Paul II, Rome, Oct 15, 2000

Immaculate Conception, Mary, my Mother. Live in me. Act in me. Speak in and through me. Think your thoughts in my mind. Love, through my heart. Give me your dispositions and feelings. Teach, lead and guide me to Jesus. Correct, enlighten and expand my thoughts and behavior. Possess my soul. Take over my entire personality and life. Replace it with yourself. Incline me to constant adoration and thanksgiving. Pray in me and through me. Let me live in you and keep me in this union always. – Pope John Paul II 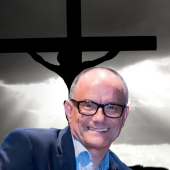 Brian is an aspiring Catholic, husband, father, speaker and writer. He's the Co-Founder and Executive Director of Possibility Productions.

A Walk in the Park

Your Stable, the Manger, and the Dung Heap