Posted by Deacon Lawrence | Apr 12, 2020 | A Catholic Deacon reflects on Faith, Art, and Our Spiritual Journey (by Lawrence Klimecki)

“The Resurrection of Jesus is the fulfillment of all of God’s promises to us.” 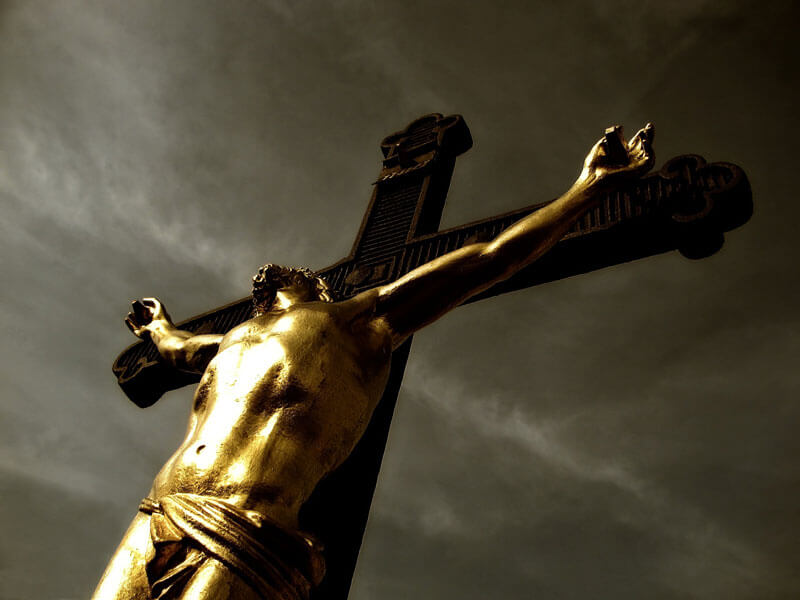 Satan must have been pleased with himself. Imagine this embodiment of evil, the father of lies, a murderer from the beginning, smiling in satisfaction as Jesus dies on the cross.

It was the devil’s greatest triumph, he thwarted God’s plan to save mankind. Ever since the beginning of all things, he hated this creature God had created from the dust of the earth. This man and woman of flesh had cost him everything and his sole purpose for existence became a mission to separate man from God.

He nearly succeeded once, there at the beginning. He attacked the woman first, tempting her to lean on her own understanding rather than God’s. Through her he corrupted the man, causing them both to turn away from God. They lost the robe of grace God had created them to bear, and Satan thought surely that would be an end to God’s great enterprise.

But as Satan is all evil, God is all merciful. God placed the man and the woman outside of the Garden lest they eat of the Tree of Life and live forever in their fallen state. And He promised them a savior would one day come, crush the serpent, and offer man the return of the grace he was created to bear.

But the wait for the savior was long, giving the evil one ample opportunity to come between man and God. And so he did. Again and again throughout the history of man, the devil seduced man into turning away from the one God, in favor of idols of stone and wood, silver and gold. But each time, God responded by holding out his hand, welcoming man back into the sanctuary of His divine love.

Finally the Savior was born, the Holy One of God, destined to save man from himself. And the devil was there. He could not tempt the virgin into refusal, her faith was too strong. Did he even try? Some say he tried to tempt Joseph, but what could he do against a man so righteous that he uprooted his family and moved them hundreds of miles, because an angel told him to, “in a dream.”

The devil tried to tempt the Holy One Himself, promising him even all the earthly kingdoms of the world, if only the man would kneel before him.

When that didn’t work Satan turned to the followers of Jesus. He had better luck there. He succeeded in getting Judas to betray his Lord, and then tormented Judas with such guilt that the betrayer hanged himself. The devil was then able to get Simon, the Rock, to deny that he even knew who this Jesus was.

The devil delighted in all that followed. A trial that convicted Jesus on the testimony of two liars, pawns of the devil, a sentence of death, the pain and suffering, the torture of the Savior, must have pleased Satan no end. Finally, Jesus is executed in the most humiliating way possible, as a common criminal, crucified between two thieves. Surely, thought the evil one, God had been thwarted. There would be no salvation for man. After all, he, the devil, was the prince of this world. He held man firmly in his grasp and would not let him go. The “Savior of the World” was dead, how could He now usher in the Kingdom of God? At the very least, God would have to come up with a better plan.

And so the devil sat back, very pleased with himself. His realm of the damned would continue to grow, Heaven would be empty and God would know the pain of the loneliness that He had sentenced Satan to.

But then, something was not quite right. An uneasiness that the Liar could not shake crept over him. Far off at the edge of his realm, he heard a noise. It was soft at first, but grew louder. Angels, those spirits that refused to join him in his rebellion so long ago, were singing “Alleluia!” The smile fell from his face as he heard a booming echo throughout Sheol. The booming continued until at last the gates of Hell crashed down, trampled underfoot by the Messiah. The Savior, anointed by the Holy Spirit, came not as a damned soul, but as a King shining with the uncreated light of God. And Satan, perhaps for the first time, was afraid.

The Resurrection of Jesus is the fulfillment of all of God’s promises to us. Not even a spirit, whose sole purpose is to separate us from God, can thwart that. God has promised us eternal life in the Kingdom to come, with Jesus as our King. And nothing, no evil power, no enemy of God can prevent that from happening.

We know how the story ends, we win.

Pax vobiscum
Easter Sunday of the Resurrection of the Lord

This is the Perfect Prayer