The Hero’s Journey of the Spirit – part XII

Posted by Deacon Lawrence | Jun 25, 2018 | A Catholic Deacon reflects on Faith, Art, and Our Spiritual Journey (by Lawrence Klimecki)

“This is when the hero risks everything. He must draw on all his skills and experiences, which he has gathered along the way, to overcome his greatest challenge.”

Every good hero story builds up to a great ordeal, a battle with the villain. Our spiritual hero’s quest is no exception. The journey of the Spirit is an inward journey and the great battle we must win is often against our own fears and doubts.

Everything the hero has experienced up to this point prepares him for this moment. He has gained new skills, acquired help in the form of allies or magical objects, and has had his resolve tested every step of the way. Now he is ready to face his adversary, the person or force that seeks to prevent the hero from accomplishing his quest.

We too must be formed in order to defeat the Adversary, or rather we must be re-formed. We must be broken down, shown the folly of our past lives in order to re-build and re-form ourselves. The Adversary will try to use our past against us but we have learned how to properly use our past to strengthen us.

This part of the movie, the approach and the ordeal are some of the most exciting parts. The approach to the villains stronghold, the dragon’s cave, or the place the hero has been forbidden to go, is a reflection of that point in our spiritual journey, where we must decide if we are truly committed to this quest. The Adversary may use our past doubts and fears against us. He may cause us to have second thoughts or doubt our ability to overcome him. But that’s OK because we have looked back on our journey up to this point and see everything with fresh eyes. We see a little more like God sees, we see our past in its proper perspective. We have found new weapons and new allies to use in our fight and we are finally prepared to face down our Adversary. 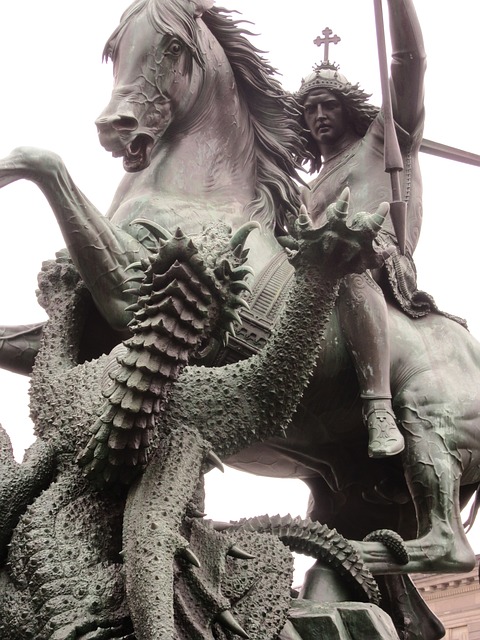 The ordeal, or battle, or crisis, is the high-point of the movie. It is what everything is building up to. Luke Skywalker faces Darth Vader, Dorothy faces the Wicked Witch, Bilbo faces the dragon Smaug.

This is when the hero risks everything. He must draw on all his skills and experiences, which he has gathered along the way, to overcome his greatest challenge.

In “Kung Fu Panda,” Po must not only draw on the kung fu skills he has learned but also the lessons about friendship, family, and what he has learned about himself. This is where the resolve of the hero is tested, is he truly ready to die, having faith that he will be reborn?

In the final moments of “Star Wars,” Luke is challenged to let go of his past that relied on technology, on the “way things are always done,” and rely instead on “the force.” Luke lets his old self die so that he can be reborn as a Jedi knight, a sort of warrior monk.

This is true of our spiritual journey as well. We have the inner voice of God always guiding us in ways to overcome the enemy. Our great battle may be difficult to recognize because our Adversary likes to hide.

One of a screenwriters greatest challenges is to adapt a literary work, especially a work that has been loved by generations. J.R.R. Tolkien’s “The Hobbit” was published in 1937 to critical acclaim. It has since been adapted as a stage play, a radio drama, an animated feature, a graphic novel, and a big budget major film. Each adaptation is slightly different, as the writer has to pick and choose scenes and dialog to tell the story in a given amount of time and with certain limitations. What evolves is a story informed by different points of view that draw out subtle themes and aspects, which may not have been readily apparent in the story’s initial form.

In he most recent re-telling of “The Hobbit,”‘ the big budget trilogy of movies produced by Peter Jackson, it is the second movie “The Desolation of Smaug,” that deals with the hero’s great ordeal as J.R.R. Tolkien conceived it.

In the movie everything leads up to Bilbo’s encounter with Smaug, the dragon. At the climax of the film, Bilbo is thrust into the dragon’s lair, but he is not immediately faced with the fire breathing dragon ready to incinerate him. Instead he is initially met with the sight of chamber upon chamber filled with gold. Even the humble hobbit has to deal with the temptation of sudden, easy wealth.

But it is a lie, because the dragon is there, underneath the piles of gold. The danger we have been expecting is still there, and the tension builds as Bilbo enters into a verbal fencing match with the dragon, drawing on all his adventures up to this point to keep from being roasted on the spot.

This is how our battle with the Adversary goes. When we are ready to face him, he may be hiding. He hides under the shadow of our former self. He hides under all the things we once found so attractive, all of our old wants and desires, our doubts and insecurities, all designed to tempt us to forsake our journey one last time.

But if we have learned from our journey up to this point, it is a clumsy attempt. When Satan tempted Jesus in the wilderness he gives away his advantage, he shows us his greatest weapons to be used against us.

He tempts Jesus with sensual pleasure by taunting Him to turn stone into bread. The devil then appeals to His pride by reminding Him that He can command angels to help Him, and Satan plays on man’s desire for power over others, by offering Jesus all the kingdoms in the world.

This final ordeal is an inner battle because the battle is for the soul of man and the battlefield is his heart.

This is how we defeat our Adversary, not by ignoring our past mistakes and failings, but by recognizing them, bringing them out of the darkness into the light where they can no longer be used against us. We look at our old identity, separate the good traits from the bad, and recognize the person God meant for us to be. We experience a death and rebirth and have come back stronger than we were before, strong enough to easily turn aside the attacks of the Adversary, if we have allowed ourselves to be re-formed.

In the Greek story of Theseus, Theseus ventures deep into the Labyrinth to confront the monstrous Minotaur. But along the way he unrolls a ball of golden thread given to him by the princess Ariadne. After he has defeated the monster, he must still find a way out of the twists and turns of the ingenious maze. But he does this easily by following Ariadne’s thread.

After we have defeated our Adversary, we may have found that we have traveled so deep within ourselves that we ask “now what?” We may have defeated the devil but remain lost in the wreckage of the life we lived before. But we have our own “Aridane’s thread,” in the form of God’s love, to lead us out of the darkness and into the light, ready to claim our reward.

The Adventure of Pilgrimage

The Dancing Bear and The Hidden Messiah