Posted by Deacon Lawrence | Dec 22, 2019 | A Catholic Deacon reflects on Faith, Art, and Our Spiritual Journey (by Lawrence Klimecki) 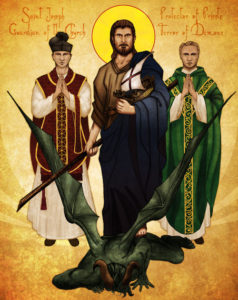 “Saint Joseph, terror of demons, pray for us” – Litany of Saint Joseph

Do you need prayers to help you against the temptations and snares of the demons? Ask Saint Joseph for help.

In the latter part of the 19th century, seeds were sown that would bear fruit over the next hundred years. The Church saw in these seeds an attack on the dignity of husbands as workers and fathers. In response, The Church looked to Saint Joseph as a model for Christian men.

In 1909 Pope Pius X approved The Litany of Saint Joseph for public and private use. A litany is a prayer of supplication, it is a prayer that asks for prayers. There are only six litanies approved by the Church, three are directed to Our Lord, Jesus, one to the Blessed Virgin Mary, one to all the saints, and one to Saint Joseph.

The litany of Saint Joseph has twenty five invocations expressing the virtues and dignities of the beloved spouse. One of the most intriguing is “terror of demons.”

We know very little about this righteous man, but we do know some things. We know he was tempted.

The Image of the Nativity 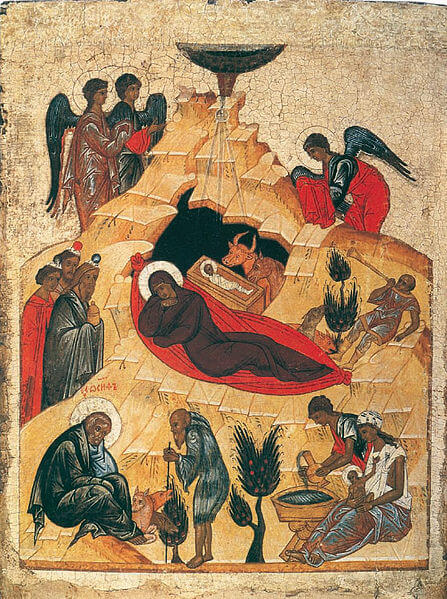 Many of us have nativity scenes in our homes at this time of year. We have a vision of a peaceful manger, surrounded by adoring shepherds, common folk, and maybe a few sheep, a donkey and an ox. The entire scene is lit by the divine light of the Christ child. But this vision is very different from the oldest imagery we have of the Nativity of the Lord.

In the earliest pictures Mary does not look lovingly at her son, she looks away toward Joseph who is removed some distance from the scene. Joseph is usually in the lower corner of the icon, depicted as somewhat despondent. Nearby an old man whispers into his ear. The old man is the devil, a demon in disguise, seeking to tempt Joseph into disbelief, whispering to him, “this is not the son of God, your wife has betrayed you.”

One of the things we know with absolute certainty is that Joseph was a righteous man. That means that Joseph walked in the ways of God, he trusted God implicitly in every aspect of his life.

According to ancient Jewish custom, to be betrothed, was to essentially be married. The ceremony was a formality. When Joseph became aware of Mary’s pregnancy, he had several options. He could have brought her before the village court but he was unwilling to expose her to shame. He considered divorcing her quietly to avoid humiliating her in public. His third option, accepting the child as his own and bringing Mary into his house seemed to be out of the question. This was Joseph’s crisis of faith and the demons of temptation were hard at work.

But consider the type of man he must have been. To him was entrusted the Mother of God and the Son of God. Twice the Lord speaks to him in a dream and upon waking he does not hesitate to comply.

Joseph is the model of the pure man, pure of heart and pure of spirit. To him God has entrusted the safety of the pinnacle of all creation. Faced with such holiness how could the demons hope to tempt him to doubt?

The world we live in is very much like the one Joseph of Nazareth lived in. The predominant culture is a pagan one. It is motivated by power and materialism, the pursuit of pleasure, and self indulgence. It is a culture that has lost its connection to the divine and so has lost its way, spiraling downward into fear and despair.

In such a world filled with chaos, Joseph was called to protect the dignity of his wife in a society that could not understand why he would not simply abandon her to the law.

But as a righteous man Joseph would have been aware of the history of his people, a cycle of cleaving to, and falling away from, God. His faithfulness to God’s covenant brought him an interior peace in the midst of a world that was constantly awash in storm.

All fathers know the feeling of holding their child in their arms for the first time. The entire world changes in a tiny heartbeat. In Joseph’s case, the demons never had a chance.

The Church, born of the water and blood that flowed from the side of Jesus, and nourished by the prayers and love of Our Lady, seeks comfort and protection from the snares of the devil, in the arms of Saint Joseph, the Terror of Demons.

The Hero’s Journey of the Spirit – part XI

The Hero’s Journey of the Spirit – part X

The Hero’s Journey of the Spirit – part IX